Now, when you think of great superheroes, which heroes come to mind?

Well, it’s hard to talk about superheroes without mentioning Superman. And, Superman is super because he’s more than a mere man.

According to Webster’s, the prefix “super” means “over and above: higher in….quality or degree”1 – “surpassing all.. others”.2

Considering this, compared to any other man, Superman is super.

Now, do you recall Superman’s Kryptonian name? It’s “Kal-El”. And recall that “el” is the Hebrew word for God. In Scripture, you’ll find it in many Hebrew names.

Growing up in my parents’ house, there was always sign hanging on the door of my room that said “Danny… God is my judge.” And, I believe it’s still there.

And, you know, throughout my life, often when people try to talk down to me, they’ll be like, “Listen here, Daniel.” And I be like, “Uh… that’s not my name.” And God is my judge.

But I digress. In any case, Superman, Kal-El has God in his Hebrew name. And given the accents of Clark Kent’s creators, Kal would likely be pronounced kol, which, in Hebrew, means voice.10 So, loosely, one could translate that name of Superman – Kal-El – as “Voice of God.”

You see, Superman is the creation of two Jewish writers. And if you recall, Kal-El is sent through space in a small ship – not unlike how Moses is sent down the Nile River in a small basket.11

Also, in Superman movies, you’ll often come across the image of Kal-El with his arms stretched wide in the shape of a cross.12 For example:

And, of course, John 3:16 tells us that God loved the world in this way: that He gave His only (one-of-a-kind) Son, that whoever is faithful to Him shall not perish, but have eternal life.

I say all that to say this: Superman is considered to be greatest superhero of all time. And as an archetype, Superman has inspired the creation of many other superheroes in our time. However, Superman is inspired by the Superhero who is over and above all – the Lord our God.

I bet some would even say that, at being a pastor, Pastor Scotton is super. 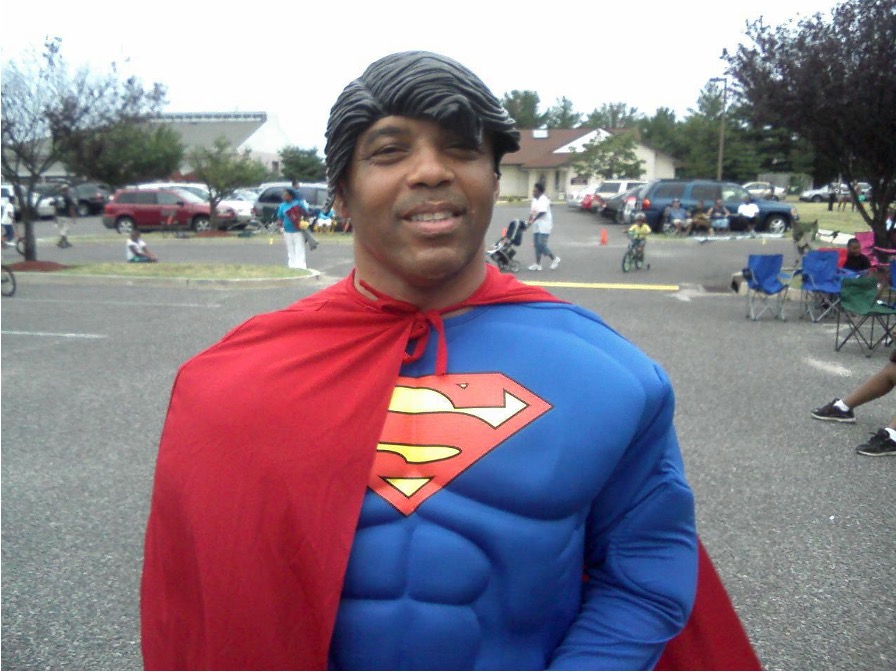 But no character in a comic book is nearly as important as the Character of this Cosmic Book. No actor deserves our attention more than the One we serve and act-for.

You should see how silly these actors look without the visual effects. Yet, in the lives of those who are really not acting, the power of God should have a visual effect.

Brothers and sisters, we all can be heroes. Because the same superpower that raised Christ from the dead, is at work in those who have been made alive in Christ (Eph 2:5).

Thanks be to Christ, it’s so super He rose.

With the power of God, let’s be superheroes.

I have not stopped giving thanks for you, remembering you in my prayers. (Eph 1:16, NIV)

Just a reminder: verse divisions are not a part of the original, biblical text. As we’ve seen, many times, so called “verses” are not even complete sentences.

To view the (edited) video of the study only, please click the play button below.

To view the video from the entire live stream — including Praise & Worship, announcements, etc., please click the play button below:

In conclusion, Paul prays that the Ephesian church would have spiritual illumination concerning the knowledge of God, so that they will know the certain hope of His calling, the glorious riches of the eternal spiritual inheritance and blessings that God gives His holy people, and His immeasurably great power for those who are continually faithful.

And that power – that superpower of the Spirit – it’s the same power that raised Christ from the dead and exalted Him in the heavens at the right hand of God – above any other supernatural power at any place at any time.

It’s the same power that put everything in creation under the feet of Christ, who is God’s gift to the Church. And the Church is His body, which is filled by Him who brings all things to their fulfillment.

As different parts of the body of Christ, we all have different gifts and different functions. But at work in all true Christians is the same superpower from the God who is over and above all.

We thank God for all of the super things Pastor Scotton has done through God’s power. He has been a hero to many on many occasions. And I pray that he has many more occasions.

With God’s superpower, we can be holy. We can be righteous. We can be united. We can be ignited. So, let’s fan into flame the super gifts of God that are in us! (cf. 2 Tim 1:6).

And with God’s superpower of the Spirit at work in us, we can all heroically proclaim the Gospel of Christ and bring someone into the Body of Christ.

So let’s make the Gospel go viral – let’s spread it far and wide. In a spiritual sense, we can all be super-spreaders.

Thanks be to Christ, it’s so super He rose.

With the power of God, let’s be superheroes.

May the LORD bless you and keep you.