Now the devil may have alluded to Psalm 2 in the second test, but here he quotes Psalm 91 explicitly.

I think it’s worth reading this popular Psalm in its entirety. Psalm 91 says:

1 Whoever dwells in the shelter of the Most High

will rest in the shadow of the Almighty.

2 I will say of the LORD, “He is my refuge and my fortress,

3 Surely he will save you

from the fowler’s snare

and from the deadly pestilence.

4 He will cover you with his feathers,

and under his wings you will find refuge;

his faithfulness will be your shield and rampart.

5 You will not fear the terror of night,

nor the arrow that flies by day,

6 nor the pestilence that stalks in the darkness,

nor the plague that destroys at midday.

7 A thousand may fall at your side,

ten thousand at your right hand,

but it will not come near you.

8 You will only observe with your eyes

and see the punishment of the wicked.

and you make the Most High your dwelling,

10 no harm will overtake you,

no disaster will come near your tent.

11 For he will command his angels concerning you

to guard you in all your ways;

12 they will lift you up in their hands,

so that you will not strike your foot against a stone.

13 You will tread on the lion and the cobra;

you will trample the great lion and the serpent.

I will protect him, for he acknowledges my name.

I will be with him in trouble,

I will deliver him and honor him.

16 With long life I will satisfy him

Now it says that the devil took Jesus to the highest point or pinnacle of the Temple.

This word often translated “highest point” is derived from the Greek word meaning “wing”.1 And this likely refers to the “wingtip” of the Temple complex.2 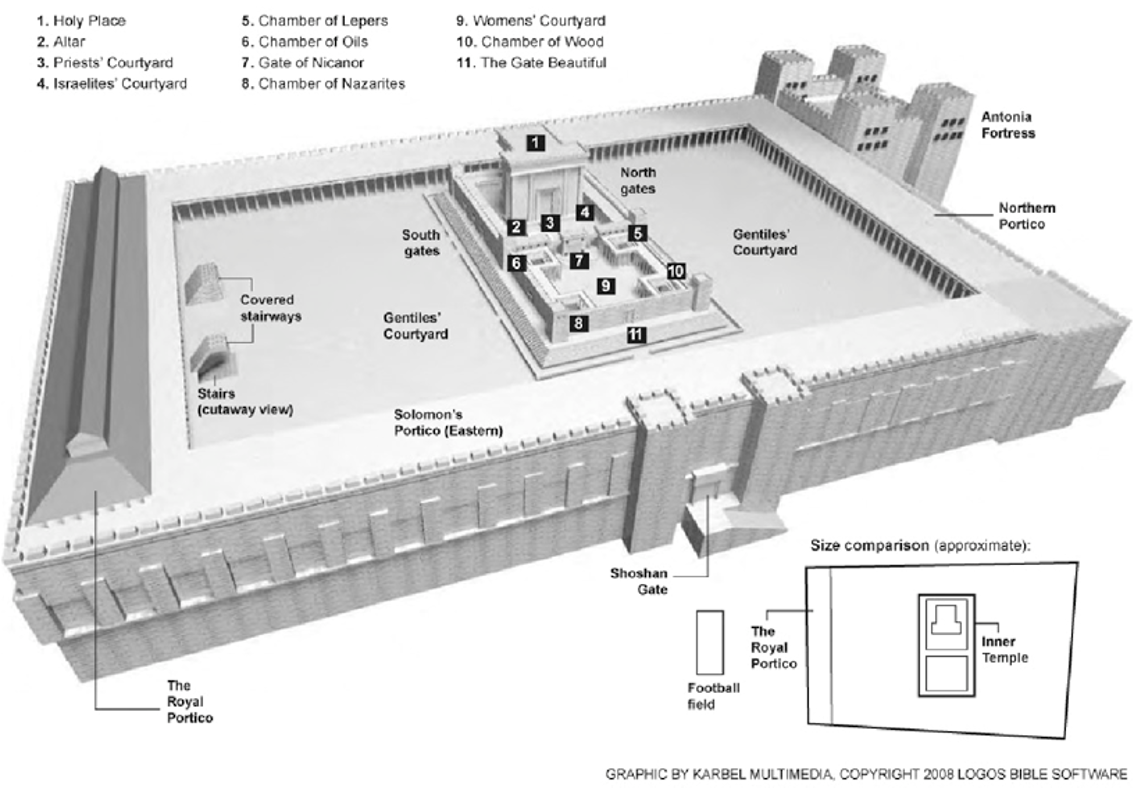 And, in Psalm 91, the Shelter of the Most High spoken of in verse 1, likely refers to the Temple.3

And the wing or wingtip of the Temple is thought to be the Royal Portico in the southeast corner.4 This Portico overlooked the Kidron Valley, which was 450 feet below.

Keep in mind that a football field is 100 yards or 300 feet. If Jesus is looking down from a height that is equivalent to one and a half football fields, He could get dizzy.5

Now have you ever had to take a test that you thought was stupid? Like why are they even asking me this right now?

Imagine being Jesus, God in the flesh, and have someone try to use the word of God to test you?

In any case, after being shot down with Scripture twice, now the devil tries to use Scripture himself.6.

As we’ve said before, the Psalms are for those are faithful to the Father. People shouldn’t sing any Psalm if they don’t abide by the first Psalm – Psalm 1.

Why test the LORD to see if He’s trustworthy… if you already trust Him?8 The devil’s line of thinking doesn’t even make sense.

He wants Jesus to test God’s promise of protection9 – when He doesn’t need even protection.10

He’s like, “since you’re the Son of God, go jump off a building since God will protect you.”

The devil wants Jesus to test if there’s protection on demand.11. He is trying to tempt God the Son to test God the Father. 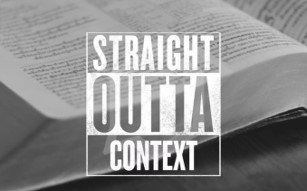 As it’s been said, “…knowing Scripture is not enough; one must interpret it correctly.”13

As we find in 2 Timothy 2:15, we have to do our best to correctly handle the word of truth.

Because one can use God’s words and still fail to convey God’s will.14 You can know what it says and not know what it means.

Don’t you hate when people twist your words and make it seem like you’re saying something you’re not? Why should we do that to the words of God?

It really irks me when I hear the word of God being twisted. How much more should it irk the Author of those words?

Distorting God’s word is diabolical. This is what the devil has been doing since the beginning.

Remember in the Garden, in Genesis 3:1, he says to Eve, “Did God, really say, “You must not eat from any tree in the garden?” Did God really say that?

Things will be right there in God’s word in black and white… and people will argue about it until they’re blue in the face.

In any case, as we see in God’s word, after manna and quail came from heaven in Exodus 16, the Israelites cried out because they had no water.

But the people were thirsty for water there, and they grumbled against Moses. They said, “Why did you bring us up out of Egypt to make us and our children and livestock die of thirst? (Ex 17:3, NIV)15

After Moses was afraid the people would stone him, the LORD had Him strike a rock – and water began to flow from it (Ex 17:5-6).

The Israelites were like, is God even with us? Does God care? Where you at, God?

And now the devil tries to get Jesus to test God – to get the Father to prove that He is there and that He cares.

In response to Satan, Jesus quotes Deuteronomy 6:16, which says:

And when the devil had finished every test, he departed from Him until an opportune time. (Lk 4:13, AT)